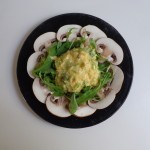 With Thanksgiving behind us and as we head into the holiday season, I will be posting dishes over the next few weeks that can grace a festive table. The first, curried crab remoulade, makes a delightful starter to brighten up a cold winter’s day. It’s an invention that was inspired by a menu I saw while walking home the other day. But not just any menu — it was posted outside Rodolphe Paquin’s restaurant, Le Repaire de Cartouche. I didn’t have time to nip inside and try the dish, so today’s recipe is how I imagined he might make what he called rémoulade de tourteaux aux céleris et champignons.

Rémoulade de tourteaux? I served the salad to a friend who wrinkled her nose when I told her what she was about to try. “Is it turtle?” she asked. No, I replied, it’s not tortu, and not baby turtledove (tourtereau) either. It’s a crab, the kind with a smooth broad shell that is most frequently seen in market stalls in northern France. (The other type of crab frequently seen in markets here is called an araignée, or spider. It’s shell is humped like a coconut, and it’s frighteningly hairy.) All this linguistic confusion gets worse when you consider that un tourteau can be more than a crab in French. The word also denotes a type of cheesecake, a heraldic shield, and a piece of motorboat machinery!

Moving on, I’ve got two things to report. First, I wanted to let you know that the Goodreads site is offering a free giveaway of my new book, Desperate to Be a Housewife. Five signed copies are available, and the contest runs until Jan. 5. If you’re not familiar with Goodreads, it’s a social networking site for people who love books and had a couple million members at last count. To sign up for the giveaway, click here.

The second bit of news is that there was a private screening yesterday of the Thanksgiving episode of Arte’s new series on food and art in which yours truly played an American cook and blogger in France. They have now shot 4 episodes of the series, which will be aired only when all 10 episodes are ready. I will keep you posted on that. The series is being produced by a company called 2P2L — a seriously genial lot. They plied us with champagne before the screening, and went on to show an engaging program about Norman Rockwell, the three-star chef Georges Blanc, turkey raising in France and the history of America’s favorite holiday. Of course it’s always difficult to see oneself on screen (I am definitely going on a diet), but it was fun to have my little moment of fame. Next stop, Hollywood. Happy cooking!

This entry was posted in 1. Starters and tagged crab, Desperate to Be a Housewife, holiday starter, recipe, remoulade, rodolphe paquin. Bookmark the permalink.