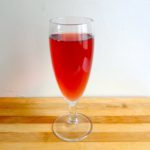 Why should the word kir be associated in my mind with the word decadence? The cocktail originally known as a blanc-cassis has nothing particularly decadent about it. It’s the most natural of apéritifs, made of dry white wine — Burgundy is traditional — and crème de cassis, or black currant liqueur. Served throughout the Burgundy region long before it was named after the priest Félix Kir, a resistance hero and mayor of Dijon, this drink is heady enough to liven up any cocktail party, and even temporarily to keep one’s mind off an election taking place thousands of miles away. Oh, and by the way, I first tasted a kir back in the 1970s, with a Paris friend who was taking me to a party. On the way over, he taught me a new dance he said everyone would be dancing. It was called la décadanse.

When this friend, Victor, told me that the cocktail he ordered was called a kir, I refused to believe it — on grounds that the word did not look French. As it happens, Félix Kir’s family was from Alsace, hence the Germanic spelling. He was a colorful character, by all accounts, as well as a patriot who managed to arrange the escape of 5,000 French prisoners from a camp in Longvic, south of Dijon, in 1940, during the early days of the Nazi occupation. Decorated for bravery, he was elected mayor of Dijon after the war and held the post until he died in 1968.

The cocktail previously known simply as blanc-cassis, or white with cassis, was served so frequently by Mayor Kir to visiting dignitaries that his name became associated with the drink — and its many variations. These include not just the kir royal, made with Champagne or another sparkling wine as a base, but also ‘kirs’ made with white wine and other liqueurs — blackberry, peach or raspberry, for example. And then there are ‘kirs’ made with cassis and red wine. If made with red Burgundy, the drink is known as a communard, while cassis with red Bordeaux is called a cardinal.

In 1960, when Mayor Kir was due to meet Nikita Khrushchev in Dijon, the local bars invented a drink they called the Double K: 1 part crème de cassis, 2 parts white wine and 2 parts vodka. In nearly 40 years in France, I have never encountered a Double K, but — given my anxiety about the American election — I might try one tonight. And if things turn out the way I hope, well, I just might dance the décadanse.