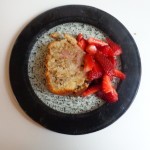 The blush of red, the burst of sweetness: with strawberries in season, it’s tempting to make them part of every dessert. And why not? They add that little je-ne-sais-quoi to whatever you may be serving, for example a simple but elegant walnut cake flavored with lemon and cinnamon. This dessert is one I have been making for 30 years, and not just because it’s delicious. It’s one of those cakes you can mix up in 10 minutes, pop into the oven and voilà — in less than an hour, a perfect sweet for spring.

And now to the blogosphere. I received a message this week from someone wanting me to help spread the word about a list she’s put together called 100 Magnificent Sites for Chefs. I took a look, and while the people on the list are far from everyday chefs — they’re stars like Anthony Bourdain, Wolfgang Puck and Jamie Oliver — it  can be fun to see what the cream of the culinary profession is up to. Meantime I will soon be joining forces with two web initiatives I admire. I’m not saying which for the moment — this is just a teaser. Call it an appetizer. Happy cooking!