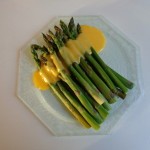 Let me tell you about the time I had lunch with Roman Polanski. It was many years ago, shortly before the Cannes Film Festival, and I was working for The Hollywood Reporter. He agreed to an interview and we met for lunch near his place in Paris. On the menu was asparagus with mousseline sauce, a version of hollandaise. Polanski ate his spears in the French style, with his fingers, holding them by the root and dipping the tip into the creamy sauce. I followed suit.  Need I say that this was one of the most erotic moments with food I’d ever experienced? But nothing happened. We just did the interview.

Well, actually there are a couple things to add. First, I admire Polanski and felt honored to be in his presence. Second, my editors at The Hollywood Reporter changed my article. The piece that was published embarrassed me, and I haven’t seen Polanski again. I could go on, but as this is a cooking column, let me just say that sauce hollandaise is one of the crowning glories of French cuisine — and truly not difficult to make. Served warm with fresh asparagus in springtime, it cannot fail to arouse the senses. As for sauce mousseline, it’s hollandaise with whipped cream added. Does that make it lighter or richer? Whichever, it’s divine.

This entry was posted in 1. Starters and tagged asparagus, asperges, hollandaise, recipe. Bookmark the permalink.