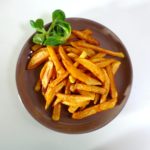 Are French fries the ultimate French food? They may have been, but their quality in bistros has declined so much over the years that their enduring popularity here in France is a mystery. I would walk across Paris for good frites — crispy on the outside, meltingly tender on the inside — but they are not so easily found. There is another solution. Making your own fries is remarkably simple, and they are just as good as the delectable original.

If you’re new to French frying, aka deep frying, you may be put off by the idea of cooking in very hot oil. Don’t be. You need no special equipment to make French fries, just a sturdy pot, a strainer and paper towels. You chop the potatoes to the desired shape, rinse them and fry them — twice. The double frying is the secret to success.

And yes, that’s how restaurants do it. The problem with restaurant fries is that laziness has set in. Instead of using fresh potatoes, many chefs now stoop to frying up pre-cut frozen potatoes that often — horrors! — have been coated in flour. The result is a soggy, tasteless mess. And although decent frozen fries that can be baked in the oven are available for the home chef, they bear no comparison to the real thing.

But just how French are French fries? This is a matter of hot dispute on opposite sides of the French-Belgian border. The Belgians claim that pommes de terre frites are part of their national cultural heritage. The story goes that, a couple centuries back, Belgian fishermen would deep-fry tiny fish they caught in the Meuse river, and when the river iced over in winter they would substitute potatoes cut into the shape of the tiny fish. The French scoff at this version of events, maintaining that frites first emerged in Paris and were sold on the streets in 1789 during the French Revolution.

Thomas Jefferson, who was ambassador to France around the time of the revolution, reputedly loved frites and brought the recipe back to the States. They were also a hit with American GIs who came over to Europe during World War I and popularized French fried potatoes across the country when they came home. Frites crossed the Channel around the mid-19th century, becoming part of the beloved British duo fish and chips.

Frites (pronounced FREET, rhymes with ‘feet’) are so identified with France that, in the infamous episode of 2003, American congressmen angry at the French refusal to invade Iraq renamed them ‘freedom fries’. They could have simply taken them off the menu — but in fact they never stopped eating them.

The French like frites so much that sometimes they will buy an overflowing paper cone of them as a snack. The first time I encountered this, while visiting friends in the Dordogne in the ’70s, I couldn’t believe my luck. Straight out of the fryer, crisp and salty, they were sinfully delicious. And for years, the frites served in restaurants were nearly as good. 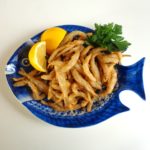 That time having passed, why not try making them at home? French fries marry well with many dishes on this site, among them all the omelets, mussels in white wine, petite friture (small fried fish), roast chicken, lamb chops and all the steaks. They are not just vegetarian — they are vegan. So whatever kind of foodie you are, buy a bottle of cooking oil and some good potatoes, roll up your sleeves and set to work.