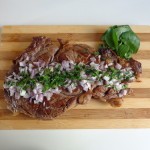 If you are from the Bordeaux region you probably know the difference, but if you’re from anywhere else, you may not: entrecôte bordelaise, one of France’s great steak dishes, is served without a wine sauce. The steak is grilled over charcoal or pan-seared, topped with minced shallots, sprinkled with sea salt and parsley, et voilà. That’s all. But entrecôte à la bordelaise is a different matter — the à la means it will be served with a rich sauce of shallots, butter and wine, preferably Bordeaux. 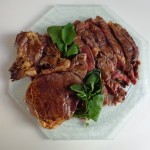 Today’s recipe includes both styles of preparation. The key is to use a premium cut of beef. In France, these dishes are traditionally made with the steak known as entrecôte, which literally means between the ribs. Good substitutes include rib-eye, sirloin, Porterhouse, New York strip, club, Scotch fillet and Delmonico. 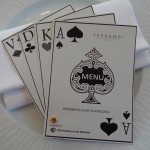 And now for something completely different. I had the pleasure yesterday of lunching at the Ecole Ferrandi, a cooking school that has been praised in France as the Harvard of gastronomy. The occasion was a gathering of the Reuter Dinosaur Club (read: aging journalists who have worked for Reuters and lived to tell the tale). It was so impressive that I took some photos to share with you. 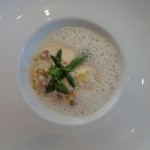 From the menu, I chose a starter of a foamy soup of smoked haddock with asparagus tips and cockles. For the main course I had fillet of red mullet and bream, bouillabaisse style, replete with tiny langoustines and a delicious rouille (saffron mayonnaise). This was followed by a cheese plate and, for dessert, an absolutely gorgeous lychee Bavarian cream on a pink biscuit accompanied by Champagne-flavored sherbet. 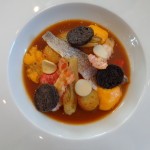 All of the cooking and serving is done by students at the school, who may begin their training as young as 15, or enroll after completing their high school education. The service was a little slow, but what the heck? These kids were turning out gourmet meals that would not have been out of place at a three-star restaurant. In fact, the school’s board is headed by Joël Robuchon, one of France’s greatest chefs. And the lunch costs just 30 euros, a bargain for this kind of meal. 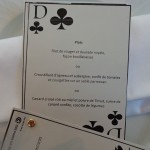 Would I go back? Yes, definitely, providing I had plenty of time and a very big appetite. It was so much fun!