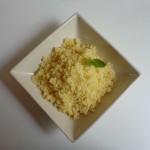 This is a recipe for couscous, but it is also a test. Some people in Czech Republic have managed to hack into the email updates that go out to subscribers with each of my posts. They have now twice inserted links in these emails to online ‘loan’ sites where they clearly hope to take advantage of the unwary. I have done something to try to make it impossible for them to do it again, and need to test it by putting a new post up on my site. If you receive this in an email update and there’s link that doesn’t say Couscous, don’t click on it. I didn’t put it there. I am pursuing my research into this situation — it’s interesting — and will provide a full account within the next couple of days. In the meantime, here’s…

Originally from North Africa, this light, fluffy grain has become a highly popular dish in France when accompanied by grilled meat and a spicy vegetable stew.  The recipe provided here is for the grain, which is made of durum wheat, like the best spaghetti. It is quite simple to prepare and makes a lovely side dish — or, in my daughter’s opinion, a delicious breakfast when sprinkled with sugar, cinnamon and a dash of milk. When the French say they like couscous, however, they mean the full dish — zucchini, carrots, turnips, celery and chick peas in a spicy, tomato-flavored soup, as well as chicken, lamb, beef, merguez or, occasionally, fish. Just how much they like it was revealed in a 2011 survey in which couscous came third among favorite foods of the French! It was outranked only by magret de canard (duck filet) and moules-frites (mussels with French fries). Couscous has been part of the French culinary repertoire since at least the 17th century, when it crossed the Mediterranean to Toulon. For centuries it was prepared from millet, and still is in sub-Saharan Africa, where it is pounded by women using huge wooden bowls and thick wooden rods. I saw this when I visited Mali a while back. In fact, paleoethnobotanists — people who study plants cultivated by prehistoric humans — believe that millet could be one of the first widely farmed foods. Which means that when you make a plate of couscous, you are linking up culinarily with some of our earliest ancestors. I just love this idea. Happy cooking!

The survey of 999 people was carried out by TNS-Sofres, a highly regarded French polling agency, for the magazine Vie Pratique Gourmand.

This entry was posted in 9. Pasta, Rice, Grains and tagged couscous, recipe. Bookmark the permalink.