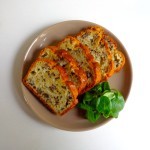 Walnuts and roquefort marry well, as they say. The combination turns up often in salads and as an after-dinner treat, perhaps with some pear slices alongside. In this savory cake, traditionally served in France at cocktail hour, the sharpness of the roquefort is offset every so slightly by the sweetness of the walnuts and the mild flavor of olive oil. It makes a festive offering for guests as we enter both the holiday season and the darkest days of the year.

But what is cake, French style? This is one of those cases when the French take an English word and tweak it ever so slightly for their purposes. A French cake is always made in the shape of a loaf — never round or square. It comes in both sweet and savory versions. You will find cake au chocolat (in a loaf), which is generally denser than gâteau au chocolat (round). The most common sweet cake is rum flavored and filled with candied fruit, although lemon cake is also popular. In recent years, savory cakes have come barreling into fashion. A recipe for cake with olives, bacon and pistachios can be found here.

I was inspired to make the walnut-roquefort cake by my friend Ann Mah, the food and travel writer, who served a similar version when I went over to her Paris place for drinks last August. (For her slightly different recipe, click here.) It made an elegant partner for Champagne — and was so irresistible that I’m afraid to say I had more than one slice.

With the holiday season nearly upon us, I have begun updating the Menus section of this site. New autumn menus for omnivores, vegetarians and vegans are now posted, and new holiday menus will be up by the end of the weekend. If you’d like to add a French touch to your festivities this year, please take a look. And…