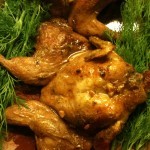 Perfect for one, two or a crowd, quail makes a fine dish both for holidays and every day. And the good news is that quail is far easier to find these days, both in France — where the birds are farmed now — and in the States (there was a recent New York Times article on where to find quail in Manhattan). In this recipe, the birds are basted with a marinade of olive oil, cumin, ground coriander seeds and garlic and roasted in a very hot oven to produce a crispy, juicy, flavorful dish. A dish that could be served on Thanksgiving with pomegranate relish — far lighter than cranberry sauce — and perhaps some couscous. 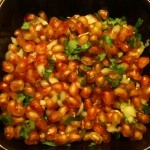 This is the second installment of my proposals for Thanksgiving with a French/Mediterranean twist, and I’d like to use it to pay homage to my favorite American writer on French food, Patricia Wells, who over the years has been an absolute inspiration to me. The quail recipe described above is similar to one in her wonderful cookbook Patricia Wells at Home in Provence, which I’ve been using since it came out in 1996. An earlier book by Wells, Bistro Cooking, has gone around the world with me, allowing me to produce French meals with panache in places as farflung as Moscow and Manila. Patricia Wells and I were colleagues at the International Herald Tribune in the 1980s and ’90s. Like me, she grew up in Wisconsin. If you have not yet tried out her cookbooks, I encourage you to do so — they’re well-written, informative and the recipes are fantastic.

Just as a reminder, this site’s first Thanksgiving offering was stuffed pumpkin, perfect for vegetarians, and you may also want to take a fresh look at sweet potatoes with herbs. On Friday, the third and final installment of this Thanksgiving special, The Everyday French Chef will be offering a recipe for homemade mayonnaise — perfect for turkey sandwiches, and not nearly as hard to make as you may fear. In fact it takes about three minutes. If you’d like to shop for this ahead of time, get some very fresh eggs, free-range or organic, as well as a lemon, Dijon mustard and some salad oil — sunflower, safflower, whatever, but not olive oil, which is too heavy for this sauce. Happy Thanksgiving!