This spring in Paris has seen a great profusion of white asparagus. It came onto the market in early March, ahead of the green variety, and at prices so tempting I couldn’t resist. This, plus a request from a Japanese cooking student, has sparked my creativity this season. I have served white asparagus many times, with a wide variety of sauces. For the delicate flavor of this versatile vegetable can be complemented in many ways.

Opinions differ on white asparagus, but the French generally consider it a greater delicacy than the green variety. Its white color stems from the fact that it is grown underground. It is generally available only during the spring. In terms of preparation, the main difference between white and green asparagus is that the white spears must be peeled. This is not a major conundrum, however. A light touch with a vegetable peeler will do the trick.

And now to the sauces. The asparagus shown in the photo above is adorned with a sauce of crème fraîche, lemon juice, salt, pepper and chives that I invented in my kitchen (well, perhaps someone thought of this before, but I’ve never seen a recipe). It is light and fresh, and marries well with the asparagus without overwhelming it. 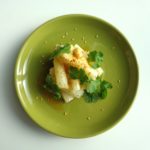 Another sauce I invented combines sesame oil, lemon juice and salt. It is shown here on asparagus spears that have been cut into segments and piled up for an elegant starter. The asparagus is sprinkled with toasted sesame seeds, drizzled with the sauce and topped with fronds of fresh cilantro.

If you’d like to go for a more classic combination, serve white asparagus with mustard vinaigrette, balsamic vinaigrette or, the princess of sauces, hollandaise. For an egg-based sauce that is far easier to prepare than hollandaise, you could try another of my springtime creations, a ‘mimosa’ sauce made of a minced soft-boiled egg mixed with olive oil and lemon juice. (This sauce came about on a country Sunday when we had a leftover soft-boiled egg after breakfast. As they say, or as Frank Zappa might say, necessity is the mother of invention.)

Moving on, some restaurant news. Le Monde ran a big article this week on the revival in Paris of old-fashioned bistros — places that serve old-fashioned dishes like blanquette de veau, oeufs durs mayonnaise and … white asparagus, and where red-and-white checked tablecloths, bread baskets and pyrex glassware hark back to an earlier era. The author attributes the trend to a quest in our complex era for l’authentique (the authentic), which he goes on to rename le fauxthentique, (a play on the word ‘false’), for of course we can never recapture the true nature of what used to be.

One restaurant highlighted in the article is Aux Bons Crus, a bistro located near the town hall of the 11th arrondissement. I dined there recently with a friend and would have to say the false comes through more strongly than the true. The place has all the touches of an old-fashioned bistro — chalkboard menus, retro decor, etc. — but the food did not live up to the reputation, or my memories, of classic French cooking in days gone by. 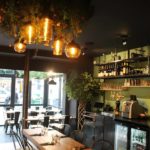 What the article did not mention is another trend in Paris, of young chefs putting a modern spin on classic dishes. The latest such establishment to open is JJ, a very contemporary bistro located, I am extremely happy to say, right downstairs from my apartment. It is run by two friends — John, the British-born chef, and Jérémie, who takes care of the front of the house — and the cooking is absolutely inspired. For example, at a private opening last weekend, they offfered a delicate, creamy carrot soup with cockles and herbs (to die for), foie gras with hazelnuts and a foamy morel appetizer served in a small cup.

I am looking forward to visiting JJ as often as possible. They have a lunchtime menu priced at 20 euros for two courses or 22 euros for three, and the place, which opened on Tuesday, is already packed. As time goes on, I hope to be able to offer you an Everyday French Chef rendition of some of their creations. And in the meantime…