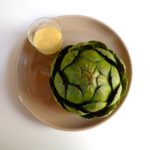 When I was a kid growing up in the United States, artichokes were considered a great delicacy in my family. But as we lived far from California, where they were grown, they were expensive. My mother would cook a single artichoke for the four of us, cut into quarters. When I came to France and was served a whole artichoke for the first time, I thought it must be a mistake. But artichokes are available everywhere here. They grow wild along the roadside in parts of the south, their crowns bursting into glorious purple bloom if they remain unharvested. So it wasn’t a mistake. I had simply landed in paradise.

It is customary in France to serve a whole artichoke per person as a first course, accompanied by a sauce for dipping the leaves and the heart. The sauce served most often is a vinaigrette made with Dijon mustard, red wine vinegar and an uncomplicated salad oil. Sometimes I use this sauce for artichokes, while other times I opt for the delicious combination of lemon juice and olive oil. On special occasions, I serve artichokes with homemade mayonnaise. That recipe will be coming along soon.

This entry was posted in 1. Starters and tagged artichauds, artichokes, mustard vinaigrette, vegan. Bookmark the permalink.