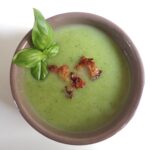 Some days you just need a nice bowl of soup. And the French take on broccoli soup is just right for easing body and soul given the climate of this turbulent autumn (and I’m not talking about the weather). The basic recipe is ultrasimple. Broccoli is simmered with potato, leek, and garlic, then puréed to smoothness. Add a dash of lemon juice, stir in some cream and top with croutons. That’s the French way — but there are many variations… 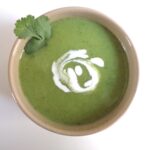 You can go Italian, stirring in some olive oil and topping each bowl with grated parmesan. For a Spanish flavor, add chorizo chips. Or — one of my favorites — skip the cream and instead add finely grated ginger and a swirl of coconut milk. All of these versions are healthy and tasty, and two are vegan — with croutons (no cream), and with ginger and coconut milk.

The funny thing about what the French call brocolis (why they dropped one ‘c’, nobody knows) is that despite this veggie’s huge popularity across the border in Italy, it was introduced here only recently, and still rarely appears on bistro menus. When I first arrived in the mid-70s, broccoli was hard if not impossible to find. A quick online check confirms this. Although broccoli was introduced to France during the Renaissance by Catherine de Medicis, it has been commercially cultivated here only since the 1980s.

Today, however, supermarkets in Paris are overflowing with broccoli. I make it often, usually cooked al dente in one of two combinations: with garlic, lemon and olive oil, or with soy and a dash of sesame oil. The Larousse Gastronomique, the French culinary bible, says that broccoli may be served ‘like asparagus’ — i.e. with hollandaise or another sauce — ‘as a purée, in a gratin, or alongside meat’. But in practice, I’ve only seen broccoli served in restaurants as one lonely floweret in combination with other veggies.

The thing to remember when preparing broccoli is that it loses its brilliant emerald color if it is overcooked, fading to an unlucious olive drab. The trick is to blanch it quickly if serving al dente, or — if making a purée or a soup — not to cover the pot. The Chinese are past masters of this art, as I’ve learned in recent months while experimenting with Szechuan cuisine. You can find a knock-out broccoli recipe on this Szechuan site.

For what it’s worth, when drawing up a list of recipes to post from now to the end of the year, I was taken aback to discover that I had yet to mention broccoli on this site. While broccoli has bad rep among some, mainly the younger generation, I depend on it through the cooler months. It’s low in calories and high in Vitamins C and K. The French now love it so much that they’ve doubly pluralized it — adding an ‘s’ to broccoli, the Italian plural of broccolo. So if, like me, you’re a fan, why not try this soup? In any of its many guises…

This entry was posted in 2. Soups. Bookmark the permalink.