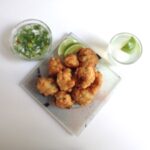 Strong drink may be needed to get through the next couple of weeks, so here’s a rum cocktail from the French Antilles and crispy cod fritters to go with it. The cocktail, ti punch, is based on rhum agricole, a clear rum distilled from cane sugar juice with a flavor remarkably different from other rums on the market. Add some lime juice and raw sugar, and your mood will definitely improve. The fritters are fun to make and come with a spicy salsa. 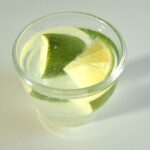 Let’s start with the cocktail. Ti punch is said to have been invented in 1848 on the tiny island of Marie Galante to celebrate the abolition of slavery. The island, which is temptingly described as having white sand beaches, lush greenery and sweeping views, is part of Guadeloupe, one of France’s two Caribbean island départements — i.e. they’re not territories, like Puerto Rico in the case of the States, but actual ‘states’ like Hawaii.

The other such island is Martinique, which produces the only rhum agricole to have been granted the AOC quality-control label (Appellation d’Origine Côntrolée). And here’s the thing about rhum agricole. It’s absolutely delicious. And while it may be harder to find outside of France, it’s available elsewhere via online shopping sites (see recipe for details).

If settling in for a long night of watching election returns, or for any other reason, you can mix up a pitcher of ti punch to go the distance. But this cocktail is traditionally mixed in the glass, one by one, often by the guests themselves (with as much rum as they care to add). Ice is not traditional — oddly, the drink is served at room temperature in the steamy tropics — but no one says you can’t add it if you prefer the drink chilled, as I do.

Now for the fritters. Acras de morue are traditionally made from salt cod, which must be desalted. But fresh cod may be substituted with no discernable difference in flavor. You mince the cod in a food processor, add shallot, parsley, allspice and hot pepper, and mix with a simple batter before frying in hot oil. As you drop each spoonful of the mixture into the oil, little balls magically take form. You can serve the fritters straight out of the pot — any kids who may be around will demand it — or set them aside for reheating later. 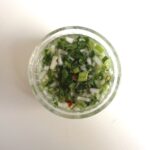 The fritters marry well with sauce chien, which translates as ‘dog sauce’ but has nothing to do with dogs. This French Caribbean salsa is in fact named for a steel knife used locally with the brand name Couteau Chien®. Sauce chien differs from Latin American salsas because it does not include tomatoes. It’s made of fresh herbs, onion, scallion, garlic, hot pepper, oil and water — you can make it as spicy as you like by varying the amount of hot pepper.

For the record, the Couteau Chien® is manufactured by the knife maker Thiers-Issard in Auvergne, in the heart of France, but is sold primarily in the Antilles. According to the broadcaster France Info, the knives are so popular there that the market was flooded at one point with counterfeits from China, identifiable because the dog on the fake knives immodestly displayed their private parts.

Meanwhile here in Paris, where we are now under a 9 p.m. curfew, the autumn nights are stretching not just longer but lonelier. In a country where the dinner hour begins around 8, friends can’t come be invited because they wouldn’t make it home in time. And fines for violating the curfew are steep: 135 euros ($160) for a first violation, 200 euros for a second and 3,750 euros plus six months in jail for a third.

Parisians are getting creative to ward off solitude. One popular solution is le cocktail dinatoire — an early evening cocktail party with significant hors d’oeuvres. Such events can include up to six people, the limit decreed by the government for any gathering. Another solution, and I claim credit for this one, is the sleepover dinner, aka le pyjama party. I’m trying this out tonight for the first time, with one guest only. We’ll see.

With restrictions tightening around the globe, we need all the help we can get to make it through this depressing season. But take it from me — wherever you may be, a few rounds of ti punch with spicy cod fritters on the side are guaranteed to cheer the atmosphere.

This entry was posted in 1. Starters, Drinks. Bookmark the permalink.