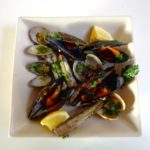 I discovered this dish at a beachside restaurant near Sète in the south of France, and found it so delicious that I asked the chef for the recipe. It is a trilogy of shellfish — mussels, clams and razor clams — that are cooked until just tender and then coated in a persillade sauce of parsley, garlic and olive oil. The recipe is simple, quick and fun to make. The combination, redolent of sun and sea, will knock your socks off. 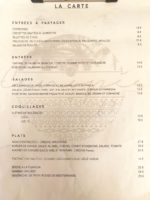 The restaurant in question, La Canopée, offers a range of seafood, from squid sautéed with chorizo to octopus salad and grilled gambas. Take a look at the menu to get a sense of the kind of cuisine on offer now at trendy French eateries. I’ve been going to La Canopée for the past three summers. New this year is a poke bowl — marinated raw salmon, avocado, mango, rice, sesame seeds and cilantro.

The poke bowl, which emanates from Hawaii, has taken France by storm in recent months. I discovered it via my 19-year-old daughter, a font of wisdom on the latest food trends. But is this kind of innovation a good thing or a bad thing? I got to thinking about it recently when a friend sent me an article from The Guardian headlined ‘The Rise and Fall of French Cuisine‘.

In this article, the author states that French cuisine became increasingly dull and repetitive in recent decades (he calls it ‘gravied blandness’), but has since been revived thanks to the addition of mojitos, cappucino, Asian food and le hamburger. I beg to disagree. Of course French bistros, like restaurants everywhere, have had their ups and downs, but to pour scorn on an entire national cuisine? Non, non et non!

Only laziness and lack of imagination can have prevented this author from seeking out gems where simple French food is and always has been fabulous, or from visiting the homes of everyday French chefs who have kept tradition alive. I do not see the addition of the hamburger — which is now offered everywhere, including expensively topped with foie gras by leading chefs like Joel Rebuchon — as an improvement of the French culinary repertoire. Ditto cappucino and the poke bowl.

But while purists may decry such deviations from classical French cuisine, we live in a globalized world, and innovation is not about to stop. In fact, I welcome the new arrivals. What I don’t appreciate is a journalist bouncing into Paris and proclaiming that French cuisine has been saved by Cuban cocktails. (To be fair, he offers a detailed and lively look at the history of French restaurant cooking.)

Thank goodness my summer reading has not been confined to this article. In contrast is Save Me the Plums, the wonderful new memoir by Ruth Reichl, who edited Gourmet magazine for ten years. She is a fabulous writer and raconteur whose mouthwatering descriptions of food filled me with admiration and envy. Highly recommended.

I am currently on a hiatus from summer travels and will be back in a few days with another recipe, this time for a salad with fresh figs that I created during the ongoing Paris heatwave. Then I’ll take another break, returning in mid-August.