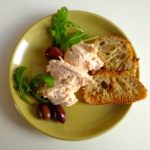 I first discovered tarama in France, where it has been popular as a starter for decades or possibly longer. It is traditionally made from bottarga — cured and salted roe that has been pressed and sealed in wax. But, as I learned when shopping for this blog post, it is more often made these days with fresh salted roe, which is a fraction of the cost of the cured variety. The other ingredients are oil, bread, milk and lemon juice, and preparation is easy.

Tarama, aka taramosalata, originally hails from Greece, but these days it is available and appreciated around the world. Commercial varieties are generally quite pink due to the addition of red food coloring, while the homemade version ranges from pale pink to golden yellow depending on the type of oil used.

I decided to experiment for this post and bought both kinds of roe — fresh and cured. The fresh roe cost 2.80 euros for 100 grams (about 1/4 pound), while the bottarga cost 14.50 euros for the same quantity. I also experimented by using sunflower oil with the fresh roe and a half-and-half mixture of sunflower and olive oil with the bottarga. You can see the results in this photo.

I took the two types of tarama produced by this experiment to a dinner at a friend’s house for a blind tasting (I didn’t identify which type of roe was used). The result was three votes in favor of the fresh roe version, and one vote for the one using bottarga. Personally, I found the bottarga version to be more delicate, but unfortunately the flavor was somewhat overwhelmed by the olive oil. From now on, I will use fresh roe and a neutral oil.

But this is for reasons of economy rather than culinary merit. Bottarga (poutargue in French) is rightly considered a delicacy throughout the Mediterranean. In France it hails from Martigues, near Marseille, and is typically made from gray mullet roe. Bottarga is popular in pasta dishes in Italy, while elsewhere it served with toast or flatbread. It has begun appearing in sophisticated starters in Paris bistros — for example, a fabulous dish of black rice with cubed raw fish topped with poutargue petals at Le Denoyez, in Belleville.

When I went shopping for bottarga, the sales clerk at Les Cyclades, a Greek food shop down the street from me, told me that shoppers wanting to make their own tarama mainly use fresh salted cod roe these days, while he mainly sells poutargue to the local Jewish community to be served finely sliced as a delicacy over the Sabbath.

Tarama was traditionally prepared using a mortar and pestle, but now it can be whipped up in a blender in a matter of minutes. The recipe is the same whether you use bottarga or fresh roe: After briefly soaking the bread in milk, you mix all of the ingredients in the blender. Et voilà. Some recipes call for the addition of onion or garlic, but I have never encountered this in France.

I learned to make tarama nearly 40 years ago during my brief incarnation as a chef at a small Paris bistro. Preparing it again for this post has been a revelation — it’s laughably easy, far superior to the commercial variety, and now, thanks to the fresh roe, remarkably inexpensive. I suggest you give it a try.

This entry was posted in 1. Starters and tagged bottarga, poutargue, recette, recipe, tarama. Bookmark the permalink.