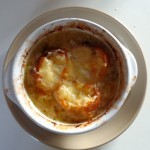 Just how French is French onion soup? It clearly originated here in France, and became famous as a midnight snack at the huge Les Halles market in central Paris until the Baltard Pavilions were torn down in 1971 to make way for a shopping center. Based on its status as the iconic dish of the ‘belly of Paris,’ French onion soup jumped the Channel and the Atlantic to great applause. In Paris today it is featured on bistro menus all over town. But the fact remains: I don’t know a single French Parisian who actually eats French onion soup.

This is a pity, for French onion soup is not just intensely flavorful, it is hearty enough to warm the coldest of winter nights (and the coldest of hearts?). I first encountered it as a teen on my first trip to Paris. My dad had been invited to a medical conference and he brought the whole family with him. As the only one with even a modest notion of French, I was appointed tour guide and restaurant organizer. ‘Let’s have a late supper at Les Halles,’ my dad suggested. This was before the market was moved out of town. I flipped through a going-out guide, found a restaurant called Au Chien Qui Fume (The Smoking Dog’s) and off we went. It was just like in the movies — delivery men carrying half-sides of beef, cries of vendors, hookers in the doorways, and all this amid a glorious profusion of food — artichokes and feathered poultry and sausages everywhere you looked. We found our table and were not disappointed. The onion soup, with its thick layer of bubbling cheese on top, was out of this world. In fact, to my dad’s lasting regret, the whole experience of our trip was so memorable that a few years later I came back to Paris and never moved home again. Now that’s saying something about the power of soup!

This entry was posted in 2. Soups and tagged French onion soup, recipe, soupe a l'oignon gratinée. Bookmark the permalink.