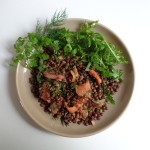 Lentils are often paired with salmon in France. In a twist on that combination, this recipe pairs warm lentils with smoked salmon in an herbal salad that takes the edge off a cold autumn day. It’s country cooking with a touch of sophistication. Served with a good wine — red or white — it can make a meal at lunchtime or a hearty starter for dinner, ideally before a cheery fire.

Lentils have been grown in France for centuries, the finest — lentilles vertes du Puy — hailing from the rugged south-central region of Auvergne. They take their name from the French word for ‘lens’ — and in fact their Latin appellation is lens culinaris, or culinary lens, for the simple reason that a lentil looks like a small … lens.

One of the world’s oldest cultivated foods, lentils have been farmed since around 10,000 years ago, when agriculture was just beginning. Their popularity is linked not only to their flavor — nutty, a little smoky — but also to their wonderful nutritional qualities. They are packed with protein, vitamins and minerals, and have been ranked as one of the world’s healthiest foods.

This hasn’t stopped French chefs from elevating them to great heights of gastronomy. In kitchens boasting Michelin stars, lentils have been pounded into flour and served as blini, paired with lobster, used as stuffing for holiday fowl and blended into delicious creamy soups. (In case you missed it, one of my favorite local chefs, Rodolphe Paquin, shared his recipe for creamy lentil soup with me a couple of years ago. You can find it here.)

Known as le caviar du pauvre — ‘poor man’s caviar’ — lentils have traditionally been served most often in France in the dish known as petit salé (salted pork), in which they are paired with inexpensive cuts like ham hock, hearty sausages and slabs of bacon that are immersed in brine before cooking. This popular bistro dish is seen less often in Paris these days due to the rise of lighter cooking, and everyday chefs may prefer simpler preparations. For example, a warm herbal salad with salmon…