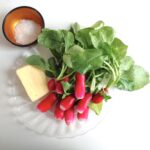 A quintessentially French dish that comes into its own in springtime is radis au beurre, or radishes with butter and salt. This traditional bistro fare makes a great start to a meal. I often serve radis au beurre at cocktail hour — fresher and much lighter than chips or nuts, especially if you go easy on the butter. Radis au beurre may also be served as a first course at the table, often accompanied by other back-to-the-land starters.

As you can imagine, radis au beurre (pronounced rah-DEE oh brr) is ridiculously easy to prepare. You wash the radishes, cut away the root ends, arrange on plates or a platter and serve with unsalted butter and a small cup of salt. It’s both simple and convivial. Guests dip the radishes first into the butter, then into the salt, using the leaves as a handle.

Having lived in France now for nearly 50 years, it’s hard for me to imagine any other way to serve this super healthy veggie. Indeed, my encyclopedia of French cuisine, the Grand Larousse gastronomique, says of radishes: ‘They are served plain, with fresh butter and salt.’ That’s it. Radis au beurre recipes these days may include embellishments, such as adding chopped herbs to the butter or using flavored salt, but I prefer the original. 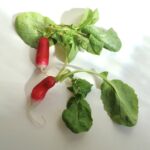 One thing to note is that French radishes are rosy red with a white tip and elongated rather than round. They also tend to be less piquant than round varieties. (Strangely, they are referred to in English as ‘French breakfast radishes’, although I have never seen radishes served for breakfast over here.) No need to fret if you live elsewhere. Any red radishes would be fine for this dish.

On the health front, radishes are packed with vitamins and minerals and are virtually calorie free. They’ve been around for more than 5,000 years — radishes were cultivated by the Egyptians, who allegedly fed them to the workers who built the pyramids, while the Greeks are said to have dedicated radishes to Apollo, god of the sun — and of healing.

While April in Paris may evoke chestnuts in blossom, as in the song, it is also the month when mountains of radishes appear at farmers markets. The fact that they’re inexpensive, even in these days of spiraling prices, only adds to their attraction.

In fact, radishes with butter are so popular over here that there’s a Paris bistro named Le Radis Beurre, as I discovered while researching this blog post. Oddly, radis au beurre does not feature on the menu they’ve posted online. It seems instead to be a metaphor for the philosophy behind the restaurant, which features dishes made of fresh, seasonal products.

If you’d like to serve radis au beurre at cocktail hour, they’d go well with a chilled white or rosé, a kir or another apéritif. When I serve this dish as a starter at the table, I generally include a couple more hors d’oeuvres, such as pâté, dry-cured sausage or ham (such as proscuitto), tarama, tapenade, or perhaps eggs with mayo or topped with red caviar.

I can already hear the skeptics objecting, ‘What? This can’t be French cuisine. It’s too easy!’ But no, mes amis. For the everyday French chef, simplicity is the heart of the art.