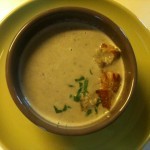 It only takes one word to describe this creamy lentil soup: sublime. Created by Rodolphe Paquin — the chef and owner of Le Repaire de Cartouche, one of my favorite neighborhood bistros — it is a soup that will knock your socks off. Not for the faint-hearted, it is richissimo, with vast quantities of cream. But that is what makes it oh, so delicious.

M. Paquin, who kindly contributed his recipe to The Everyday French Chef, uses either chicken stock or water as a base when he makes this soup. As for the lentils, he prefers the small green lentils found over here called lentilles du Puy. If they’re not available where you live, just go for high-quality lentils. 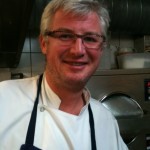 Rodolphe Paquin, who comes from Normandy, has been chef at Le Repaire de Cartouche since 1997. The restaurant is named for a dashing bandit and ladies’ man who ran a gang of thieves in the Bastille area in the 18th century, before the French revolution. Cartouche is perhaps France’s version of Robin Hood — he took from the rich and gave to the poor (up to a point). His repaire, or hide-out, was reputedly in the building on the Rue Amelot where the restaurant now stands, its walls covered in murals depicting the exploits of Cartouche. Despite his legendary prowess in evading the royal authorities, Cartouche met a bad end. He was arrested, deserted by his comrades and tortured to death on the wheel at the esplanade where the Hôtel de Ville, the Paris city hall, now stands. Nonetheless his legend lives on in poetry, theater and the movies, notably a 1962 film in which Cartouche was played by the equally dashing Jean-Paul Belmondo.